This guide provides a list of all supported MIUI 11 for Xiaomi devices. The Chinese smartphone manufacturer’s customized Android OS, dubbed as MIUI, is hands down the most customizable and feature-rich skin that you could get your hands on. While OEM’s such as OnePlus and Samsung comes with their skins as well, yet the popular opinion still has that the Chinese OEM might outdo the other does. Though some feel like the Xiaomi’s OS is more about bloatware, yet it is up for debate. What isn’t, is the extent up to which you could personalize it as per your need. Right from tweaking the various UI aspects to many unique features, you name it and it has it all.

Furthermore, it has its app for every purpose, right from listening to music, note-taking, handling of media files to a pretty useful File Explorer as well. As far as timely updates go, it isn’t the fastest one in the market, but it makes sure everyone does get a taste of the latest Android OS. In this regard, Google released Android 10 in September last year and it was quick to follow suit. Most of the devices already seem to jump into the bandwagon, while a few are still playing the waiting game.

Today, we will list out all the variants of the MIUI and the devices on which it is available. The firmware includes the Global Stable, Russia Stable, India Stable, Europe Stable, China Stable, Beta Chinese, and the Indonesia Stable build. Likewise, if you are having the device of some other manufacturer but which to rekindle the joy of the MIUI, well even that is very many devices. There are some unofficial MIUI 11 custom ROMs available for a handful of devices. We will have a look at them as well. But first, let’s check out what MIUI 11 has to offer. Without further ado, let’s begin.

Let’s check out some of the pretty impressive MIUI 11 features that it has to offer. 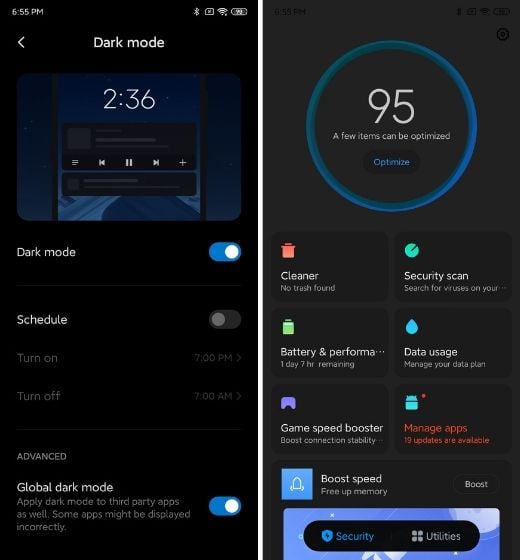 Dark Mode was one of the most awaited features that finally made its way over to Android 10. Xiaomi has now incorporated the same in its MIUI 11. Not only does it look aesthetically pleasing to the eyes, but it also will result in less strain to the eyes and result in some lower battery drainage too. We tried our hands on the dark mode and Xiaomi seems to have done a pretty decent job in this regard. So if you wish to enable the same on your device, head over to Settings > Display and enable the Dark Mode toggle.

Apart from that,  you could now also specify the device as to when the dark mode should be enabled automatically. The feature is known as Dark Mode Scheduler and you will just have to enter the desired time during which your device should adopt the dark side. Likewise, Xiaomi has also incorporated the Force dark mode option. This will allow you to enable dark mode even in the app that doesn’t officially support it. 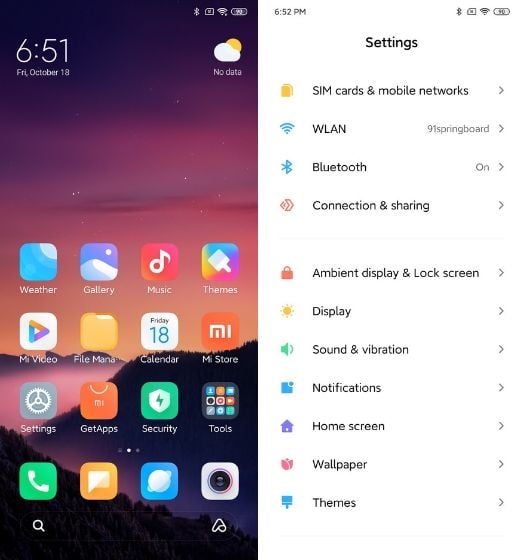 Although MIUI is never short of features, yet there are always a few complaints regarding its UI. Well, it has now put it all to rest with MIUI. They have done away with the excessive color scheme and undesirable elements. They now look more minimalistic and intuitive as well.  Likewise, there is also a new classical theme out of the box. This theme gives a fresh and new outlook to your device. There are a new squircle icon shape and some much-needed improvements to the animations and transitions effects.

Similarly, we are also noticing changes to the font style. It has now added support for Dynamic Font Scaling, which allows the apps and their contents to automatically adapt to the aspect ratio. The Notes app will probably benefit the most from this scaling. You will also notice changes to the Settings menu, with new icons and fewer boxes and lines. All this has a considerable improvement in the UI aspect of MIUI.

One of the most revolutionary features of recent times, Mi Share is the response to Apple’s AirDrop. You could now share any types of files of any size within a matter of seconds, without any complicated process. Xiaomi claims that the sending speed is up to 82MBPS. Although we can’t verify this claim as of now, yet in our test we still found it to be blazing fast. As of now, apart from Xiaomi, Oppo Realme and Vivo have agreed to join in. To try it out on your Xiaomi device, head over to the Settings menu, and tap on Connection and Sharing. There you could find the Mi Share option. 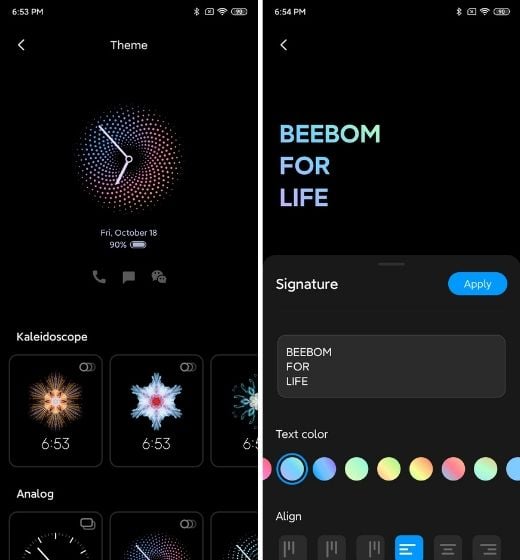 Well, first Xiaomi surprised it with the addition of Always On Display on some of its devices. While we were still praising this move from Xiaomi, they have gone a step further and now added some pretty cool features to customize this AOD. For example, you could now choose from various animated clocks, colorful backgrounds, or even add your custom moving texts.

Furthermore, we also found out another interesting feature. You could now make the edges of your display when notifications arrive. Try out the Notification light-up animation feature right away. The boring AOD displays finally have something to cheer about!

One thing for which Xiaomi is always known for is providing heavy battery juice. 4000mAh is the new normal in their devices. On top of that, you also get a battery saver mode. Well, this is something that every OEM has to offer, so what’s new? Xiaomi again went a step ahead and now offers Ultra Battery Saving Mode in MIUI 11. Once you enable it, all the background activities, memory hogger apps, and services are disabled for good. Furthermore, the wallpaper also changes to the dark black color and every type of animations gets disabled as well. 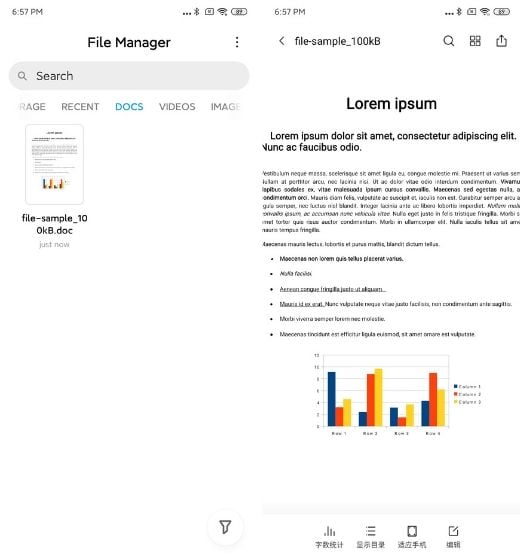 File Manager is Xiaomi’s default file handling app and it has been there since the beginning. However, with MIUI 11, the app has been blessed with some new features. You could now easily deal with many file extensions including PDF DOCX and other files. The document viewer has integrated the WPS office suite, so you don’t need an additional app to handle the Powerpoint, Word, or Excel files.

Google introduced Digital Wellbeing in Android 9 and then further improved on it in Android 10. And Xiaomi seems to have effectively followed this path as well. To have a better balance between your personal and digital lives, there’s a slew of handy tools. One among them is the App Timer feature.

As the name suggests, it allows you to limit the use of a particular. Once the app usage reaches the designated usage time, it will call it a day and you wouldn’t be able to use it further until the next day. Xiaomi has introduced this feature by the name of Screen Timer and could be found inside the Digital Wellbeing option. 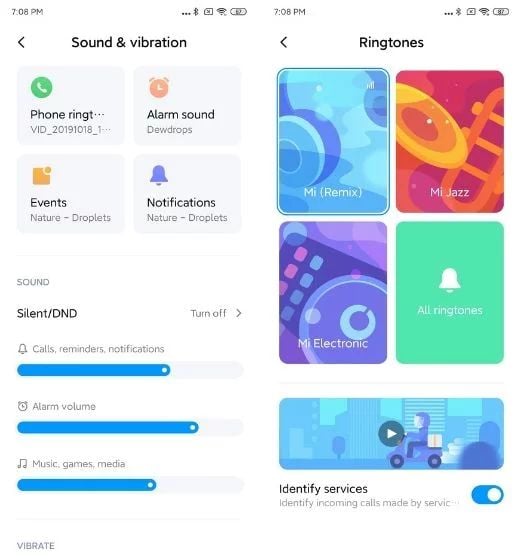 What Google did to its Sounds app, Xiaomi has done the same with its sounds collection as well. They have added a bunch of new dynamic sound effects in MIUI. Giving a new visual element to all the ringtones alarms and notifications, you are in for a treat. Some of the dynamic sounds include sunrise and sunsets sound, and the ability to add different sounds for different contacts. 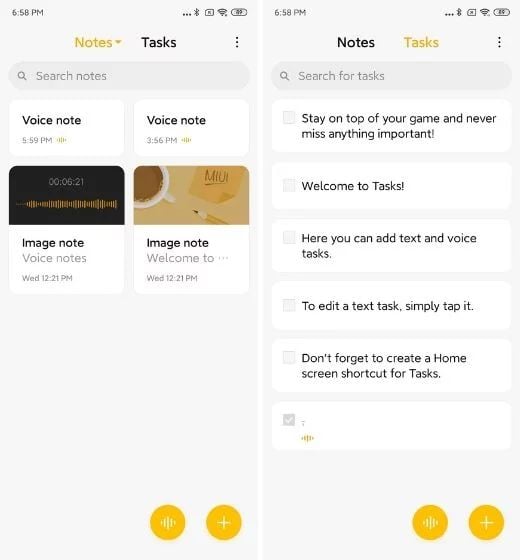 With MIUI 11, Xiaomi has integrated the Task functionality right inside the Notes app itself. Just head over to the Notes app performs a left swipe to go to the Tasks section. Furthermore, all your tasks are synced with Mi Calendar, so that you don’t miss any task at any point in time. Apart from that, if you wish to give your fingers a little rest, you could create tasks using your voice as well.

Although the static and live wallpapers were already there. Xiaomi decided to try out something new. It has now introduced the option of adding your video recordings as a wallpaper, both on the lock screen and home screen. What about sounds? You could enable sounds as well, but wouldn’t that be too much gimmicky? Well, some are calling the entire feature a gimmick, but we will leave it up to our readers to decide whether to try out this feature or not.

So these are just some of the noteworthy features to make its way over to MIUI 11. some other features that deserve your attention includes a new Calculator app, ability to track your steps and walking pattern via Trackers, a new Mint Keyboard with support for over 30 languages, Kids Space section, Blur App preview in the Recent App sections and the ability to disable all in-device sensors. This time Xiaomi has bundled in quite a lot of impressive functionalities in its latest iteration of MIUI.

Now that you are aware of all the offerings from Xiaomi’s MIUI 11, the urge to download and install the same on your device might have grown even further. Well here’s some good news for each one of you. From this guide, you could easily download the latest MIUI 11 for all Xiaomi devices. However, as is the case with other OEMs, Xiaomi releases different firmware for different regions. Furthermore, you might also notice the keyword stable or beta next to them.

For the unawares, beta versions usually bring about new features that could be tested by a few users before it could be released for the wider audience. Although it sounds interesting on paper, the thing is they are mostly more buggy and unstable than its counterpart. So only try out the beta builds if you are ready to test the new features before others but at the same time willing to trade-off with stability front. For the everyday users, we would suggest you go with the stable build, without a second thought.

There’s also one more thing to keep in mind. Although MIUI 11 was released just a few months after the release of Android 10, yet it isn’t necessary that MIUI 11 will be based on Android 10. Most of the Xiaomi devices initially received the MIUI 11 update based on Android Pie 9.0 itself. later on, the Android 10 update landed on their devices. So to clear out the air, we have mentioned the Android version as well, next to each device’s firmware package.

Furthermore, once you download the MIUI 11 ROM for your region, a question might pop up as to how to install these builds on your Xiaomi device. Well, we have a detailed video tutorial to help you out in this regard (for both the stable and beta builds). Do check it out. However, this video isn’t for the unofficial MIUI 11 Custom ROM installation, for that we will link to the specific tutorial, as and when required.

If you are a fan of Xiaomi’s custom skin and wish to get a taste of MIUI 11 on your non-Xiaomi or Xiaomi devices based on Android One, well there some good news in store. Thanks to the open-source nature of Android, developers have successfully ported the MIUI ROM onto various devices. Given below are the supported device list and the link to the tutorial from where you could download and install MIUI 11 onto your device.

So with this, we conclude the guide on the list of all supported MIUI 11 for various Xiaomi devices. We have also listed out all the new features that the latest iteration of MIUI bought with itself. Along the same lines, we have also provided a handy video tutorial that will help you out in installing the MIUI 11 firmware on your respective Xiaomi devices. If you still have any doubts left, do drop in your queries in the comments section below. Rounding off, here are some iPhone Tips and Tricks, PC tips and tricks, and Android Tips and Trick that you should check out.